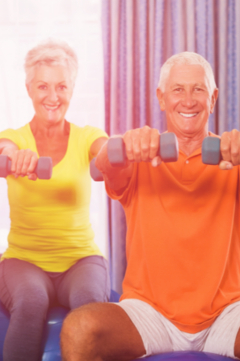 The topic of physical fitness is often associated with young adults. While it’s important for young people to develop healthy habits, it’s never too late for older adults to pursue fitness for improved bodies and minds.

Benefits for the Mind

Scientific evidence shows a correlation between exercise and positive brain health. Some studies have concluded that people in better shape tend to have enhanced memory skills, perform better on tests and, in some cases, lower chances of developing Alzheimer’s. However, many of these studies tracked people before retirement age. Can starting an exercise program later in life also reduce the risk of developing dementia?

Researchers at the Norwegian University of Science and Technology recently performed a study to find out if older people could lower dementia risk with regular fitness programs.

The results were promising; those who maintained a workout routine throughout the study were 50 percent less likely to develop dementia than those who stopped exercising.

The study also shed light on the types of exercises most helpful for brain health. Participants who achieved a heart rate of 90 percent one’s maximum for several minutes on a slightly inclined treadmill was found to be one of the best exercises.

The findings further indicate that walking, jogging or running must have some level of intensity to be effective. According to Dr. Ulrik Wisloff, author of the study, you should get out of breath during the workout. Interval training, in which a person does several minutes of intense work followed by recovery at a slower pace, is recommended. For outdoor exercise, researchers suggest routes with hills and picking up the pace for three to four minutes at a time.

The takeaway from this study is it’s never too late for someone to begin exercising! With the right cardiovascular training, seniors can improve their physical and mental health.

Avon Health Center is a local resource for older individuals and families seeking information on aging, health and wellness. To learn more about our services, contact us today!